Geoff Miller’s book, Intangibles: Big-League Stories and Strategies for Winning the Mental Game — in Baseball and in Life, is now available!

From time to time, I will be posting case studies that include sample data from our TAIS inventory.  TAIS stands for The Attentional and Interpersonal Style inventory and we use it with all of our coaching clients in corporate, sport, and military settings.  In my work with elite athletes, aspiring amateurs, Major League Baseball players, and teams, I use TAIS to help players identify their mental game strengths and weaknesses, then use TAIS data to help them shape performance improvement plans.  On the scouting side, I use TAIS to evaluate potential draft picks, which are not used in a “thumbs up, thumbs down” fashion, but more to help provide another level of detail on who the player is on and off the field, how he will handle failure and pressure, and the best ways to help each player develop skills and learn the game.  This case study is on an extremely stressed out football player who was having trouble getting his performance back on track.  I’m including only a sampling of TAIS scales (there are twenty factors that are measured when someone takes TAIS and a brief description on each so you can understand the context of the case.  Learning a bit about this athlete may help you if you have athletes like the one I’m profiling here. 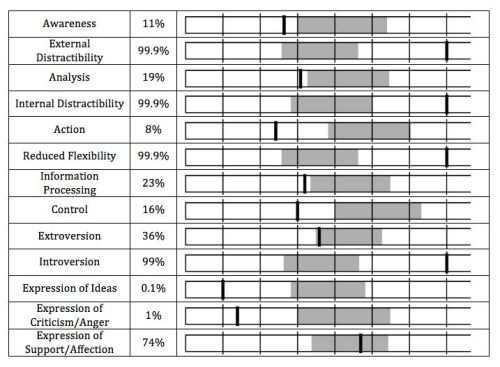 My normal approach when reviewing a profile is to look for key concentration strengths, find out strong personality factors, and pinpoint potential derailers so I can understand who the athlete is and predict where he or she will struggle in pressure situations.  However, when I see a profile like this one, my approach changes.

D was a college football player at a major Division I school and he contacted me because he only had one more year of eligibility and while he had performed well at times, his career had more ups and downs than he had hoped and he had never been able to play at a consistently high level.  He was worried about playing in the NFL, he was worried that he was going to let down his parents, coaches, and teammates, and he was worried that he was going to look back on his career and wonder why he didn’t live up to the expectations he had for himself.  My first order of business was to help him get back in control of his emotions and to reduce his stress level.

Take a look at D’s Awareness and External Distractibility scores.  Notice how different they are from the average Awareness and Distractibility scores of world champion athletes (as shown in the gray shaded areas.)  Then take notice that the same patterns are true for Analysis and Internal Distractibility and Action and Reduced Flexibility.  This pattern of scores tells me that the athlete is overwhelmed by his environment, by his thoughts, and by his emotions.  He can’t think, he can’t focus, and he doesn’t feel in control of anything going on in his life.  This is also reflected in D’s low Control score.  It was easy for me to see that D was feeling stressed out.

On Extroversion, D scored 36% and on Introversion, he scored 99%.  In general, there are times when D enjoyed being around others, but for the most part, he was a private, guarded person who needed personal space.  Team sports are much less stressful on people who need to be around others and seek out social situations.  However, I’ve worked with many introverted athletes who mostly enjoy the atmosphere of sharing so much of their time and their lives with their teammates.  What I usually hear from those athletes is that they are comfortable socially with their teammates, but they don’t let many people in too close.  They save most of their stronger friendships for people outside their sport.  D was a trusting person, but he didn’t confide much in teammates or coaches.

When discussing pleasant topics or good performances, D was open and talkative.  But he was quiet and unwilling to discuss tough situations or the discomfort he was experiencing with others.  When it came to volunteering information, D was a closed book, which made it tougher on teammates, coaches, family and friends to know how much stress and anxiety he was experiencing.

My strategy with D was to get him more comfortable developing a support system among people who were close to him.  We outlined a list of topics that he would be comfortable discussing with his girlfriend, another list that he felt like he could discuss with his position coach, and another that he could share with a few teammates who he felt closest to.  In getting some of his worries off his chest, D was able to sort through them in his head.  By hearing from teammates and coaches he hadn’t opened up to before, he saw that he didn’t have as much to worry about as he had built up in his mind.  We discussed how this communication process would help to expand his comfort zones and make it easier for him to share information with others in the future.  Then we worked on taking control of his game again.  Instead of measuring his success by the results he got in games, he would only focus on his effort.  He would rate his effort in practices and in games and each week, he would give himself a score on a scale of 1 to 10.  Effort was something he had 100% control over and he knew he could achieve this goal every time he put on his pads.  And as a talented athlete, if he gave his best and didn’t get the results he wanted, he would know that there was nothing else he could have done about it, which helped him stop second-guessing his play.

D’s improved communication with people close to him relieved stress and helped him stay focused on working hard each day instead of worrying about the future.  His focus on effort instead of results gave him back the control he was looking for, which made him more confident and more comfortable on the field.

If you are interested in taking TAIS or for more information on Winning Mind performance coaching programs for individuals and teams, please contact Geoff Miller at miller@thewinningmind.com